Prof Eleanor Stride and Pro Mohan Edirisinghe, both co-founders of AtoCap, were awarded Officer of the Order of the British Empire (OBE) for services to Engineering and Biomedical Engineering, respectively.

With this recognition they join AtoCap’s third and final founder, Prof Bill Bonfield, who already holds a CBE.

Her work has been recognized through the award of a Philip Leverhulme prize, The Royal Society Interface Award, Engineering Medal at the Parliamentary Science, Engineering & Technology for Britain awards, Acoustical Society of America Bruce Lindsay Award (2013), IET AF Harvey prize (2015), Blavatnik Awards for Young Scientists (2020). She was also made a fellow of the ERA foundation for her contributions to public engagement and promotion of Engineering, for example through the Born to Engineer series and documentaries for the BBC. She was nominated as one of the top 100 most influential Women in Engineering in 2016 and 2019, was made a fellow of the Royal Academy of Engineering in 2017 and an honorary fellow of the IET in 2020.

She has published over 150 academic papers, 7 patents and is a director of 2 spin out companies set up to translate her research into clinical practice. 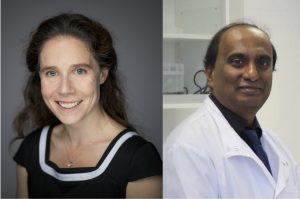 Mohan holds the established Bonfield Chair of Biomaterials in the Department of Mechanical Engineering at University College London (UCL) and has served as a University of London professor for over 30 years. He was appointed to this UCL chair in December 2005 and prior to this he was Professor of Materials at Queen Mary University of London.

He has actively pursued advanced materials processing, forming and manufacturing research, for over 25 years publishing over 500 journal papers with a H-index of 66 and over 15,000 citations (Source: Google Scholar, May 2021). In addition, his research has led to many inventions and patents and he has also delivered over a 100 keynote/invited lectures at many different international conferences and meetings worldwide. He has supervised over 250 researchers, graduating 100 doctoral students (41 to date at UCL), and has been awarded grants to the value of over £25 million, with 43 UK Research Council grants including two Platform Grants which have given him the opportunity to adventurously explore novel avenues of forming and manufacture of advanced materials for application in key areas such as healthcare.